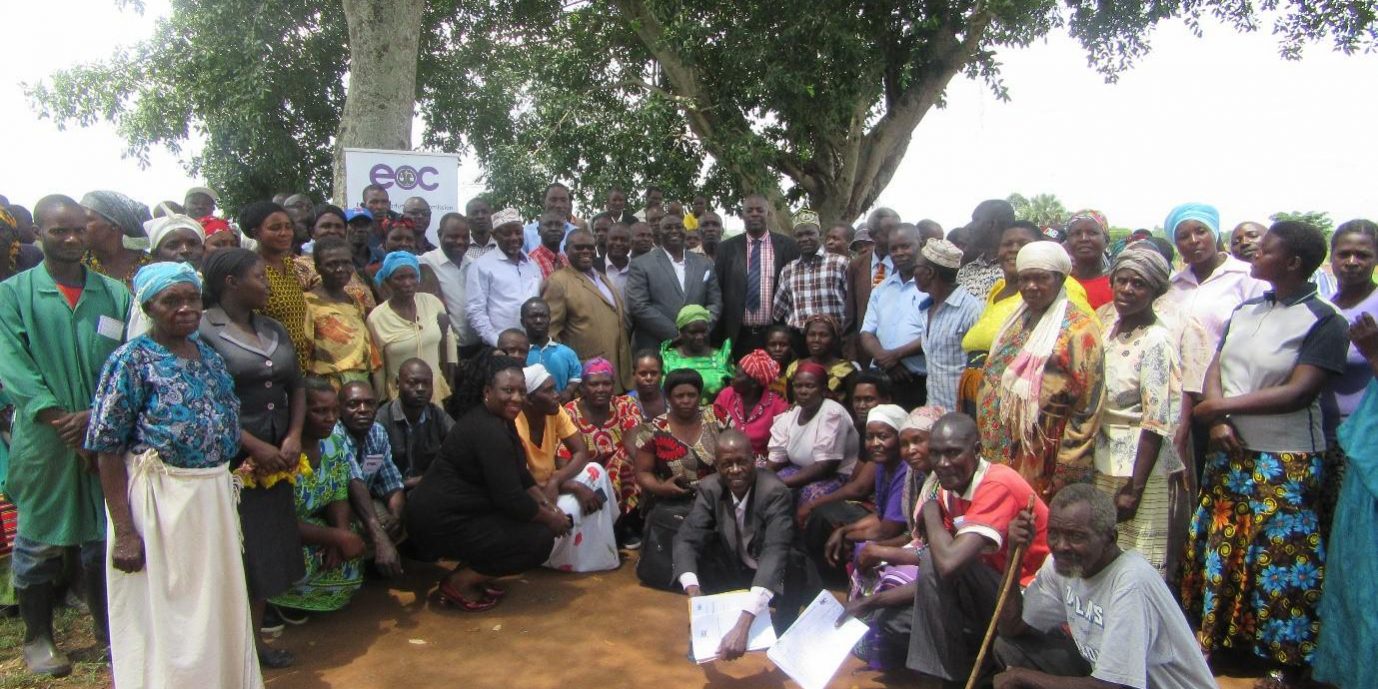 Participants at the dialogue in Kiryandongo.

Mr. Wafula Sirabo Patrobas has explained the Commission’s ongoing investigation and recent tribunal hearing in Kiryandongo district which took place on Wednesday 7th March 2018, in relation to denial of access of national identity cards for some sections of the Maragoli community and pledged to follow it up to its full conclusion.

Speaking during public dialogues in Kiryandongo and Masindi districts he said “In order to protect minorities, general provisions such as Article 32 (1) and (2) of the Constitution have to be resorted to, which guarantee affirmative action in favour of groups that have historically been discriminated against on the basis of age, disability, gender or any other ground created by custom, history or tradition in order to redress their existing inequalities and to give them equal opportunities.”

The Maragoli are an ethnic group living mainly in Kiryandongo district. Some members of the group are spread out in different parts of the country like Bugiri, Iganga, Hoima and Masindi. They are claiming recognition as Ugandans and some sections (in Kijja County) were denied National Identity Cards by the National Identification Registration Authority (NIRA).

Member Wafula implored them to unite and bargain together as a team like the IK community did in Karamoja. “Equal Opportunities begin with you in your homes – where women sit on mats and men on chairs, women are denied certain food like chicken and eggs and women cannot own property. The solution is to do away with these customs and traditions and preach equality in homes.”

Mr. Kagunzi advised members to mobilize the rest of the community who are in hiding to come out and seek social justice. “Discrimination on grounds of ethinicity should end with the Maragoli taking a firm stand to be recognized. We refuse to register for national identity cards on the grounds of naturalization. Let us stand firm until we win this case.”

The LC III Chairperson of Masindi, Mr. Robert Musasizi expressed gratitude to EOC for the initiative taken to redress imbalances and reach out to marginalized communities in Masindi and the country as a whole. He called upon the community to heed the advice received from Commission and requested them to work towards inclusive development in their communities.

The Chief Administrative Officer Kiryandongo, Mr. David Wanduru thanked the Commission for engaging with the district in areas that are pertinent in their communities. He pledged to address issues concerning the Maragoli community together with the district team and promised to receive the different issues raised in good faith.

The Principal Education Officer EOC, Ms. Petua Babirye Isabirye expressed gratitude to the Maragoli community, older persons, women, Persons With Disabilities and youth for their turn up. She explained the EOC mandate in relation to focus on special interest groups and ensuring inclusion of their needs in the development agenda. She stressed the need for ramps in public buildings, toilets and special latrines with easy access for Persons With Disabilities, special centres for children with special needs and private rooms for older persons in health facilities.

Speaking during her closing remarks on behalf of the CAO Masindi, Ms. Gladys Baligonzaki thanked EOC for choosing to come to the district. She emphasized that there is no need for discrimination against each other irrespective of ethnicity. She encouraged marginalized communities to register their complaints at the desk for special interest groups and urged district officials to listen to individual grievances on property distribution or deprivation. She stressed the need for participants to listen to radio programmes to learn about Ugandan laws and different government plans.

8th Annual Report on the State of Equal Opportunities in Uganda
September 29, 2021