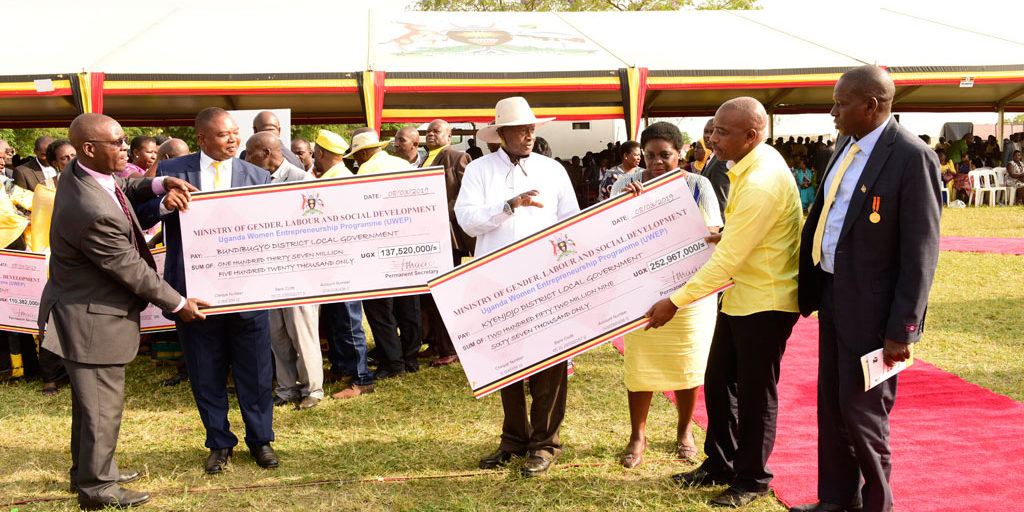 1st May is the international Labour Day celebrations, a day celebrated across the globe in recognition of the efforts of workers and the contribution they make towards the development of nations. The Equal Opportunities Commission (EOC) was among the institutions which participated in the celebration held at Saza grounds, Kamuge sub-county in Pallisa district.

The celebrations, under the theme: Building the nation through good work ethics, had H.E. President Yoweri Kaguta Museveni as Chief Guest; as well as H.E. Vice-President – Edward K. Ssekandi, Cabinet Ministers, Members of Parliament, Ambassadors, central and local government officials, , religious and cultural leaders as other guests. The Commission was represented by the Chairperson – Mrs. Sylvia Muwebwa Ntambi.

In his address, the President asked workers to support the creation of new factories in the country saying this is the only way Government will ensure creation of more jobs for Ugandans from the current 1.3 million jobs in the private sector to the desired 15 million.

The President also informed the gathering that Government is in the process of regulating the time for gambling and drinking of alcohol so as to deal with people who do not want to engage in productive activities for the economic development of the country. He also made an appeal to workers to report corrupt Government officials especially those who frustrate investors’ efforts by demanding for bribes.

On behalf of the Labour Union, Mr. Christopher Kahirita – the Chairman-General of the Confederation of Free Trade Unions of Uganda (COFTU), said the current UGX 6000 minimum wage is not good for workers and requested the President to use his prerogative to repeal this archaic legal provision and set a more realistic minimum wage for workers of the country.

In response, Hajat Janat Mukwaya, the Minister for Gender Labour and Social Development informed workers that the minimum wage committee, set up by the Government of Uganda for the review of the minimum wage, had completed its report and submitted it to Cabinet for consideration.

The celebrations were adorned with the awarding of medals to 150 Ugandans for a job well done in the labour field. The President also handed over a shs. 255m dummy cheque to 41 women groups in Pallisa district as part of the money for the Uganda Women Empowerment Programme.

In commemoration of the day, the Commission also conducted talk shows on a number of media houses to sensitize the public on how Gender and Equity planning and budgeting can promote equal opportunities for all in employment and thus contribute to inclusive development.