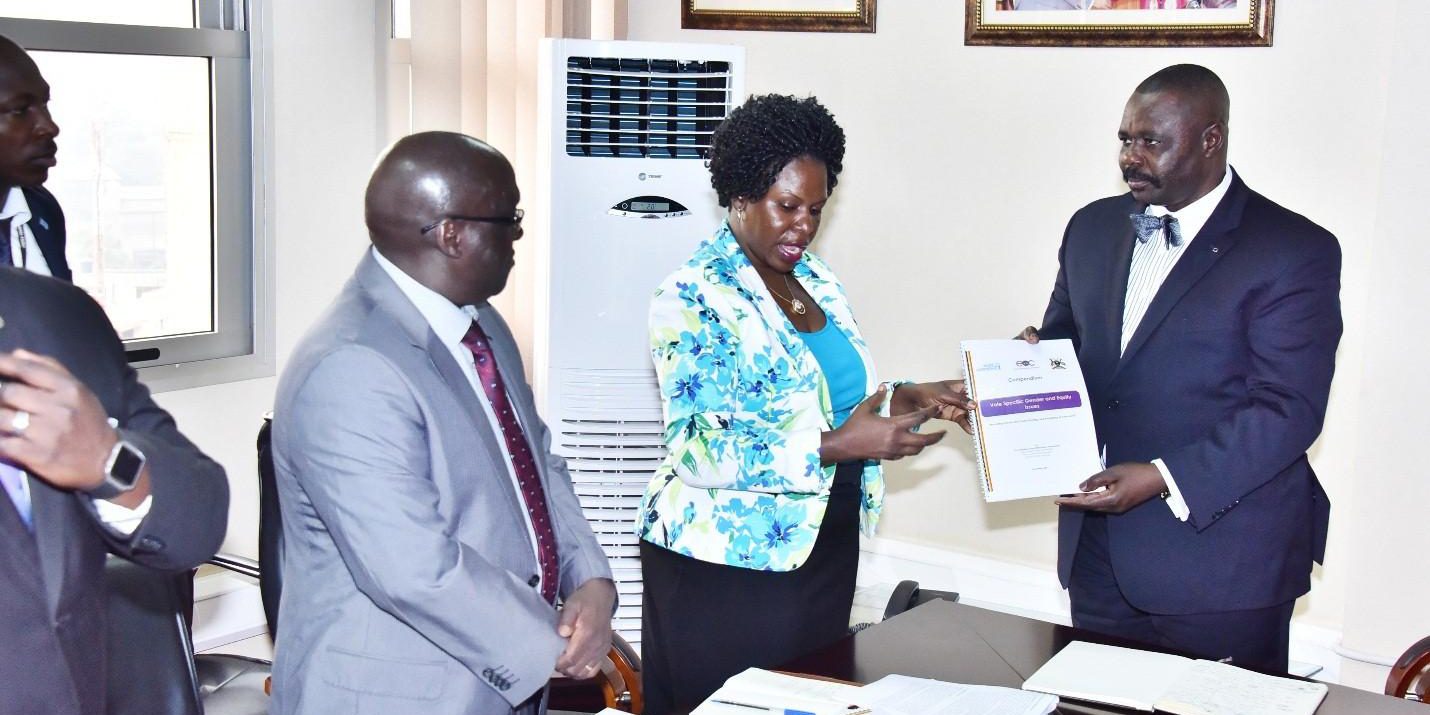 Mr. Patrick Ocailap (center) – Deputy Secretary to the Treasury receiving the assessment report from Mrs. Sylvia Muwebwa Ntambi – Chairperson to the Commission in the presence of other officials from the ministry

On 5th April 2017, the Equal Opportunities Commission (EOC) met staff of the Ministry of Finance, Planning and Economic Development at the Ministry’s  head office in Kampala to hand over the Commission’s report on the assessment results on Compliance of Ministerial Policy Statements with gender and equity requirements for the Financial Year 2017/2018.

On behalf of the Secretary to the Treasury, the report was received by Mr. Patrick Ocailap – Deputy Secretary to the Treasury. Other staff of the Ministry who attended the meeting was Mr. Godwin Kakama – Commissioner Budget Policy, Mr. Moses Zziwa – Assistant Commissioner, Mr. Robert Sekate – Acting Principal Budget Officer and Sylvia Tereka – Gender Advisor at the Ministry.

Mr. Patrick Ocailap responding to the Chairperson’s presentation of the assessment findings FY 2017/2018

In response to the assessment findings presented by the Commission’s Chairperson, Mr. Ocailap applauded the Equal Opportunities Commission for finalizing the assessments in time especially since most of the Ministries, Departments and Agencies had submitted their Ministerial Policy Statements after the deadline. He further intimated that the Ministry did not expect the Commission to meet the legal requirements of the PFMA but was glad it did.

Having received the assessment results, Mr. Ocailap informed the meeting that the ministry will be preparing the gender and equity compliance certificates for institutions which attained the minimum score and make submissions to Parliament. He added that when allocating funds in the next Financial Year (FY), Parliament will summon votes which did not meet the minimum score to explain why they performed below the minimum requirement. He pledged to hand the Minister the assessment report findings and to ensure the Commission’s recommendations are adhered to.

In her presentation, Mrs. Sylvia Muwebwa Ntambi informed the Ministry officials the purpose of the Gender and Equity assessment, the assessment tools used, general observations, challenges encountered during the assessments among others. She went ahead and explained that Parliament resolved and directed the Commission to raise the Gender and Equity compliance minimum mark from 40% to 50%. As a result, assessments were made basing on this and were in total 133 Votes. However, she informed the meeting that the Commission was in its report, presenting results of only 101 votes which had made submissions by Friday 24th March 2017. Of these, 79 scored the set minimum mark while 22 were unable to reach the minimum mark. Assessment results for the remaining 32 Votes whose submissions were made late would be ready on 3rd April 2017 while those that had not submitted would meet their assessment costs and their results would be availed 5 days after submission. Overall, the national compliance to Gender and Equity requirements for the FY 2017/2018 was 51% as compared to 53% for the FY 2016/2017.

To the Ministry of Finance, Planning and Economic Development (MoFPED), recommendations made included denial of Gender and Equity compliance certificates to the 22 votes that did not achieve the minimum qualifying score until they fulfill the necessary requirements. It was also recommended that the 79 sectors which met the minimum score of 50% and above be issued the Certificate of Gender and Equity Compliance as per the relevant section(s) of the PFMA 2015.

STATEMENT BY THE CHAIRPERSON AT THE GENDER AND EQUITY BUDGETING STAKEHOLDERS’ FORUM AT SHERATON HOTEL, KAMPALA
May 14, 2018

EOC PUSHES FOR INCLUSION OF MARGINALIZED GROUPS IN DECISION MAKING PROCESSES
May 5, 2018