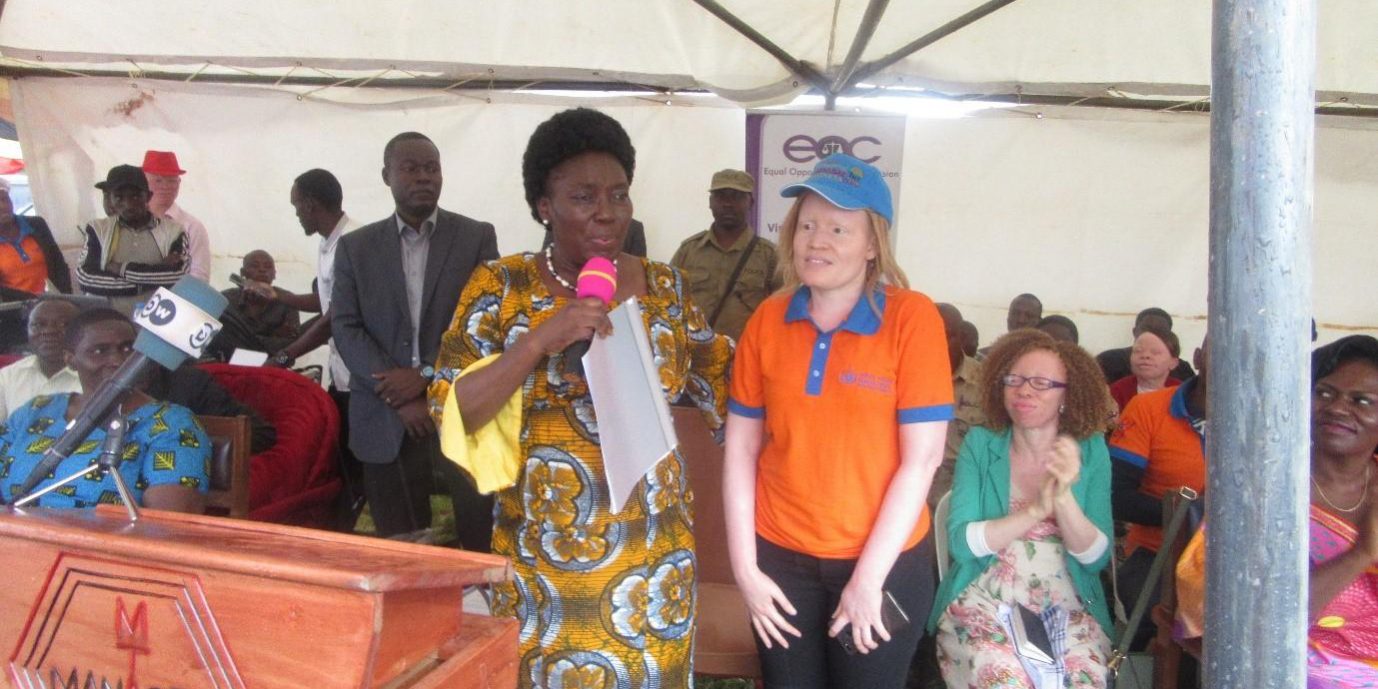 Hundreds of women, men and children turned up for the national celebrations to mark the International Albinism Awareness Day 2018. The event took place at Malukhu grounds in Mbale District and was presided over by the Rt. Hon. Speaker of Parliament Rebecca Kadaga.

The event  which begun with a march through Mbale streets led by a brass band and traditional Bagisu dancers clad in colourful orange t-shirts, drew the attention of pedestrians and motorists some of who joined in the march.

During the celebrations, Hon. Kadaga emphasized the need for provision of creams (sun screen) for people with albinism since the tax waiver was removed. “We need to have data on the number of persons with albinism in order to provide these creams at no cost.”

The Speaker tasked the education ministry to include sun screen glasses for all children with albinism in their budget for financial year 2019/20. She advised the ministry to organise a national workshop for teachers targeting albinism and all special needs children.

Hon. Kadaga applauded the EOC for a job well done in reporting about the state of equal opportunities annually and presenting reports in braille. She made a call to the Commission to carry out a survey on the number of albinos in the country, identify the root causes and further establish why the cases are rampant in Busoga and Bugisu regions. She thanked Ms. Olive Namutebi, the Executive Director of Albinism Umbrella for standing with persons with albinism and pledged to push for affirmative action in employment especially in Parliament. She used the opportunity to introduce Parliament’s new Albino staff much to the applause of the celebrants.

The MP for Persons With Disabilities Eastern Region, Hon. Asamo Helen Grace applauded Albinism Umbrella for uniting Albinos as one. She called for one voices as leaders and one voice for Albinos. “We are people with other abilities. Government of Uganda promotes inclusive education for all.” Hon. Asamo called on EOC to include gender and equity on disability so that Persons With Disabilities are not left out in the development agenda.

She clarified the delay in appointing a Minister for Disabilities and affirmed that the position would be filled soon. “Let us create an environment conducive for everyone. Parliament has introduced talking lifts to cater for Persons With Disabilities. This is a step in the right direction.”

The Chairperson EOC, Ms. Sylvia Muwebwa Ntambi, emphasized that people with albinism faced multiple forms of discrimination worldwide. She said albinism was greatly socially and medically misunderstood. “The physical appearance of persons with albinism is often the object of flawed beliefs and myths influenced by superstition, which foster their marginalization and social exclusion. This leads to various forms of stigma and discrimination.”

She re-echoed the Commission’s observations about problems facing people with albinism in Uganda which were due to low access to medical care and societal norms that exempt them from benefit and participation. “The overarching myths associated with albinism is that a child with albinism is a demon or a curse. Similar to beliefs surrounding persons with disabilities, it is very important for us to appreciate that children are gifts from God,” she added.

The UN Human Rights Country Representative, Ms. Nicole Bjerler commended government for establishing EOC who are rightly placed in addressing discrimination challenges. “People With Albinism face discrimination in all walks of life. There is a strong need to demystify albinism.” She said as a matter of urgency, UN Human Rights is at the forefront of undertaking a survey to find out the extent to which albinism exists in Uganda as a strategy to leaving no behind.

The Executive Director Albinism Umbrella, Ms. Olive Namutebi encouraged everyone to commit to albinism everyday by creating awarenesss for albinos. She emphasized the challenges they face which varied from lack of access to sunscreen due to poverty, no law provided for in the Constitution protecting albino children, no case closure for Albinos in courts, lack of sun screen glasses, lack of long stockings for children and short sighted children are not examined with large font. Namutebi added, “Without education, we cannot be economically empowered. Let us individually and collectively pledge to promote and protect the rights of Albinos so that we are able to live a life free of discrimination.”

EOC together with Albinism Umbrella convened a press conference at the media center in Kampala and were hosted to a radio talk show on Step Radio in Mbale days preceding the event.

A number of people with albinism testified about the challenges they face and this was summed up in a poem by students from St. Edwards Secondary School Manafwa:

Make it a better place for us to live.

We were beautifully, wonderfully and specially by God.

Say no to discrimination
Say no stigma
Say no ritual sacrifice

And provide a conducive environment in schools, homes and community at large.